The game involves 2 teams of 2 players. Players sit at the table in such a way that each player on the left and right has an opponent, but on opposite side – a partner.

Dealer mixes deck of cards and start giving cards from the player following him clockwise. Thus, dealer gives card to himself at the last turn. Each player is given 4 cards.

After the dealer gives out 4 cards for each player, he shows a random card from the middle of deck. The suit of this card is considered to be trump till the end of current game.

The goal of game is to take «tricks». Player, who owns the turn, should open a trick, by «betting» one or several cards of same suit. Player puts the cards face up on the table. The turn moves to next player clockwise.

Next player must either «beat» a trick, or «pass» the appropriate number of cards. If player beats the trick, he must put cards face up on the table. In this case, each card must be greater than cards of previous player by priority. Whilst passing, the cards are put on the table face down. Thus, none of other players knows which cards were dropped. Player, who have beated cards of others, wins the trick.

Any player has the right to go out of turn with 4 cards of the same suit («molodka»), even if previous players have already made a move. In this case, cards from table should be returned back to players and the drawing of trick continues according to usual rules. If two players collected the molodka simultaneously, the right of the first turn belongs to player who is closer to player, who initially performed first turn.

After the drawing of trick, the player, who win the trick, should collect cards and put them into the heap of tricks of his team. After that, all players take cards from deck until each player has 4 cards in his hand. Each player takes 1 card from the top of deck in the clockwise order. Player, who wins the trick, takes the card at first. This player must bet for drawing the next trick. If this was the last trick, then the right of the turn is retained by player even for the next game.

If there are no more cards neither in deck nor in hands, then the game is over. Players begin to calculate points scored by tricks.

If the team gets 61 or more points, then this team considered to be winner of game.

If both teams get 60 points, then none of the teams gains defeat-scores. This case is called «balls». Balls don’t affect the scores and don’t give any bonuses. Balls bring more humor to the game, so the team that loses such party will be considered «goat with balls.»

If the team got 12 defeat-scores during the series of games, then party is over.
– Improved UI and controls
– Added bots with different levels of game skill 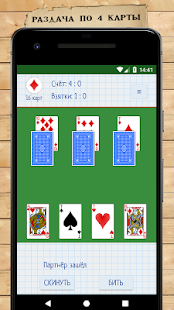 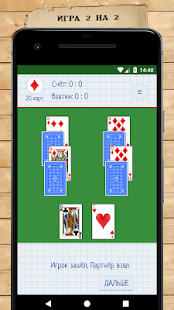 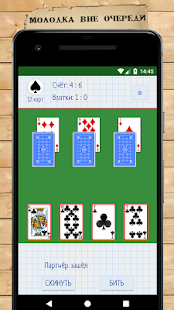 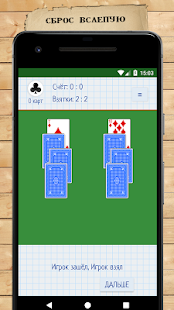 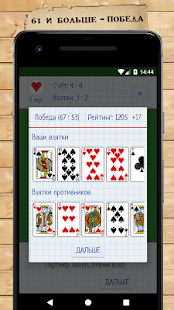 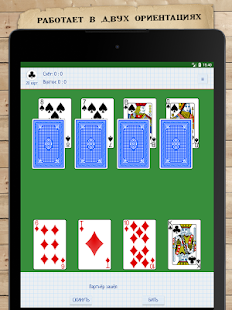 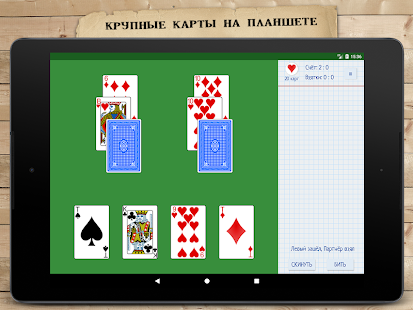